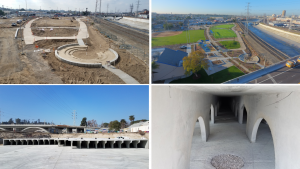 The Institute for Sustainable Infrastructure (ISI) announced today that the Albion Riverside Park, located in Los Angeles, California, is the recent recipient of the Envision® Gold award for sustainable infrastructure. To earn Envision Gold, a project must demonstrate that it delivers a heightened range of environmental, social, and economic benefits to the host and affected communities.

The Albion Riverside Park is a 10.6-acre site located adjacent to the Los Angeles River in the neighborhood of Lincoln Heights. For this project, 6 acres of land adjacent to the original park were acquired, having been previously used for industrial purposes such as ice cream manufacturing, dairy storage and distribution, metal pipe manufacturing, brewery operations, and automotive repair. After decades of industrial use, the soil on the expansion site was significantly contaminated. The contaminated soil was removed and remediated to make the site safe for public use.

The overall goal of the Albion Riverside Park project was to increase and enhance open space and recreational opportunities along the Los Angeles River, and implement stormwater Best Management Practices (BMPs) that improve the water quality of stormwater runoff. The above-ground improvements result in an expanded park facility that better serves the local community, and adds to the LA River experience in Lincoln Heights.

The Albion Riverside Park project is one of several “Proposition O” projects in the city of Los Angeles. Proposition O, which was passed in 2004 with overwhelming public support, authorized the City to fund projects up to $500 million, which are designed to prevent and remove pollutants from regional waterways and the ocean, consequently protecting public safety and meeting Federal Clean Water Act regulations. This project’s park elements are also funded through Proposition 84 (the Safe Drinking Water, Water Quality and Supply, Flood Control, River and Coastal Protection Bond Act of 2006) and Proposition K, the LA for Kids Program, a program designed to combat the inadequacies and decay of youth infrastructure throughout the City, as well as other funding from the city’s Department of Recreation and Parks (RAP).

“Every community deserves places that people can go for healthy recreation and to connect with the natural world,” said Mayor Garcetti. “The Albion Riverside Park is another milestone in our revitalization of the L.A. River — and I’m proud to have authored Proposition O so we can purchase properties like this and deliver projects that protect our river and improve our water supply.”

The Albion Riverside Park project is part of the LA River Revitalization Master Plan, River Improvement Overlay and the Cornfield Arroyo Seco Specific Site Plan. It accomplishes several goals and meets the needs of the community by:

“Turning a vacant, previously contaminated parcel of land into a public resource—allwhile protecting local water resources and reducing pollution—is a significant boon for the Lincoln Heights community and the city of Los Angeles more broadly,” said Melissa Peneycad, ISI’s Managing Director. “ISI is pleased to present the Envision Gold award for sustainable infrastructure to the city of Los Angeles and its project partners for the Albion Riverside Park project.”

“The Albion Riverside Park is part of the LA River Revitalization Master Plan, and part of our larger vision to expand recreational and green space in the First Council District,” stated Councilmember Cedillo. “The communities in CD1 have been cut off from the LA River for too long. Albion Park, and eventually G2, will provide our neighborhoods direct access to the river while improving water quality.”

The Envision sustainable infrastructure framework assesses project sustainability across five categories: Quality of Life, Leadership, Resource Allocation, Natural World, and Climate and Resilience. These key areas contribute to positive social, economic, and environmental impacts on a community during the planning, design, and construction of infrastructure projects.

As project and construction manager, the city of Los Angeles Bureau of Engineering partnered with the Department of Recreation and Parks and the Bureau of Sanitation. They also worked closely with their design consultant TetraTech and their contractor Sully-Miller.

Enhancing Public Space & Community Quality of Life
Part of the 10-acre parcel designated for the Albion Riverside Park was vacant after being used extensively for industrial purposes over the last several decades. A significant element of the project involved converting this vacant land into a park for neighboring communities to use and enjoy. The expanded park features a renovated baseball field, soccer fields, basketball courts, an outdoor plaza/event space, walking trails, fitness areas, a playground, picnic areas and public restrooms. ADA-compliant ramps, stairs and walkways are also integrated into this project and it improves community connections to other recreational facilities, such as the Downey Recreational Center Pool via an underground crossing. The park thus makes significant contributions to public space, accessibility, and overall community quality of life.

Improving Stakeholder Outreach & Engagement
Many stakeholders were actively engaged throughout this project, including city stakeholders such as the Bureau of Engineering, Department of Recreation and Parks, Bureau of Sanitation, the Mayor’s office and City Council; local residents and community groups including the Local Volunteer Neighborhood Oversight Committee, Lincoln Heights Neighborhood Council, Friends of LA River, Northeast Trees and the local Sierra Club chapter. A design charrette was used with stakeholders to identify desired park elements, many of which were included in the project design.

Managing Stormwater Runoff
As a Proposition O project, managing stormwater and water quality improvements is a very important goal for this project. The Albion Riverside Park project has been designed to divert stormwater from the existing storm drain system, providing pre-treatment and allowing for infiltration into the ground. The project is part of the Upper Los Angeles River Enhanced Watershed Management Plan which was developed to help the city of Los Angeles improve water quality in the Los Angeles River and meet Total Maximum Daily Loads (TDML) requirements set by the Los Angeles Regional Water Quality Control Board. The project will divert runoff generated by 85th percentile, 24-hour storm events (events whose total precipitation is greater than or equal to 85 percent of all 24-hour storms on an annual basis) over the project’s 300-acre watershed, and 100% of on-site runoff. Best Management Practices (BMPs) and Low–Impact Development (LID) strategies include diversion structures, permeable pavement, underground infiltration galleries, bioretention areas and pretreatment devices.

PHOTOS/IMAGES INCLUDED:
Before- and- after images are provided by the Albion Riverside Park Project team.

About Bureau of Engineering:

The city of Los Angeles, Bureau of Engineering (BOE) is the lead agency for the planning, design and construction management of public buildings, infrastructure and open space projects. Projects include municipal buildings, such as police and fire stations, convention centers, and recreational and cultural facilities, as well as bridges, street and transit projects, and stormwater and wastewater systems. Open space projects include the development of parks and the restoration of wetlands. Engineering also manages permitting for construction in the public right-of-way, as well as the city’s state-of-the-art online mapping system. Engineering’s projects are nationally recognized in the areas of environmental sustainability and design and fully support the city’s goals of creating a prosperous, livable and safe city for all residents and businesses.

About Department of Recreation and Parks:

The city of Los Angeles, Department of Recreation and Parks (RAP) are stewards to over 16,000 acres of parkland, offering extensive recreational, social and cultural programs at 444 park sites in every Los Angeles neighborhood from the valley to the sea.

One of the city’s most comprehensive social service providers, offering an array of diverse, interesting and comprehensive recreational programs to serve youth, adults and seniors.

About Bureau of Sanitation:
The city of Los Angeles, Bureau of Sanitation (LASAN) is the lead agency for environmental programs and initiatives, LASAN protects public health and the environment through the administration and management of three program areas: Clean Water (wastewater), Solid Resources (solid waste management) and Watershed Protection (stormwater).

These infrastructure programs collect, treat, recycle, and dispose the solid and liquid waste generated by the nation’s second largest city of more than four million residents. Through these essential public service programs, LA Sanitation delivers a triple bottom line of economic, environmental, and social benefits that sustain the quality of life in Los Angeles.

About ISI and Envision®: Envision is the product of a joint collaboration between ISI, which was founded by three national engineering associations: American Society of Civil Engineers (ASCE), American Council of Engineering Companies (ACEC) and American Public Works Association (APWA), and the Zofnass Program for Sustainable Infrastructure at Harvard University Graduate School of Design. For more information, please visit www.sustainableinfrastructure.org.