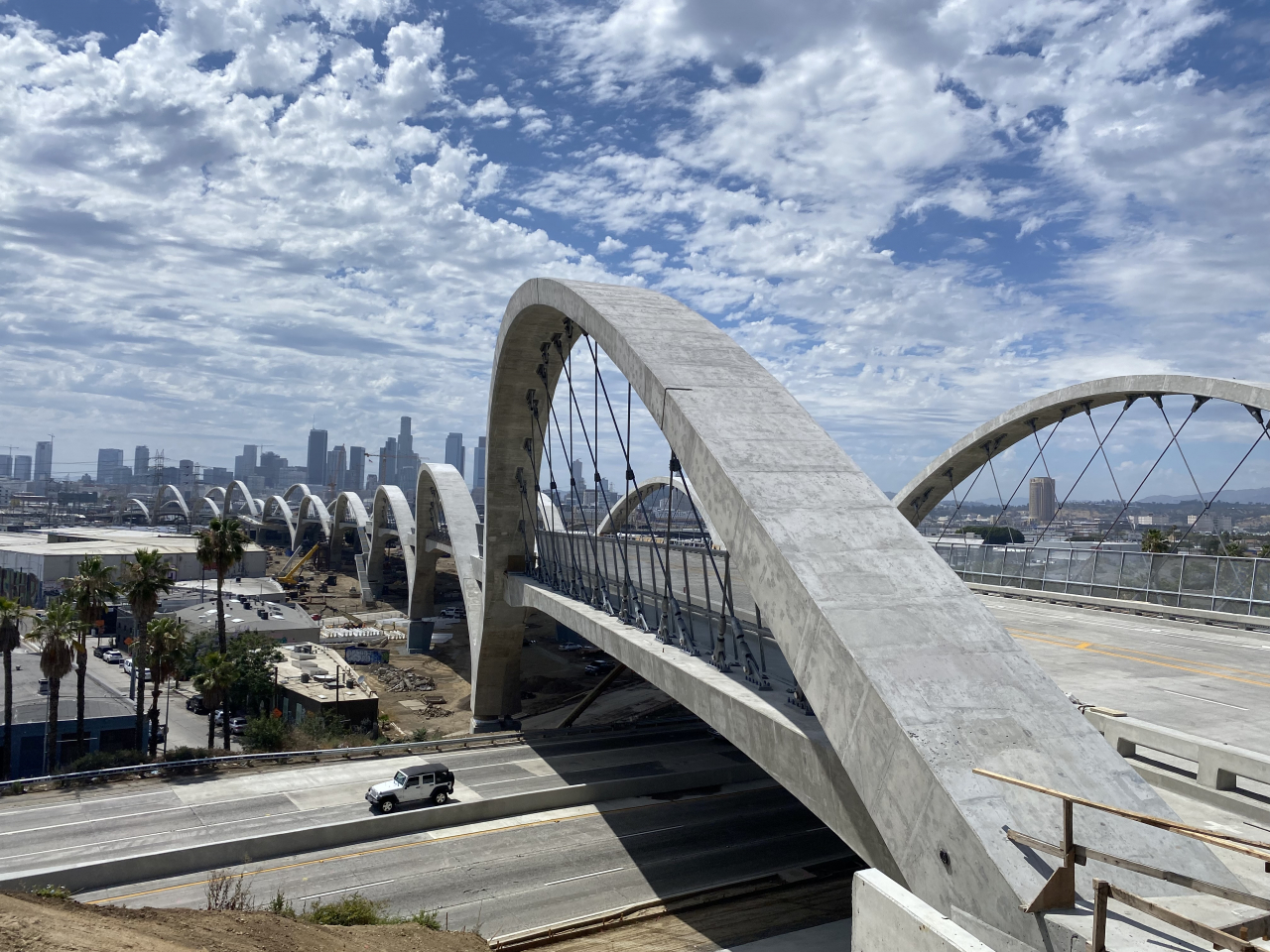 The Sixth Street Viaduct, the largest bridge project in the history of Los Angeles, has earned an Envision Platinum award for sustainability, specifically for addressing community needs, adding significant public space and amenities, and improving community safety and resiliency.

The $588-million project is funded by the Federal Highway Transportation Administration, the California Department of Transportation, and the City of Los Angeles. The City’s Bureau of Engineering, under the leadership of City Engineer Gary Lee Moore and in partnership with the City’s Bureau of Contract Administration, led the development of the new Sixth Street Viaduct Replacement Project.

History of the Sixth Street Viaduct

The original viaduct—built in 1932—served as a vital connection between Los Angeles’ Arts District on the west side and the Boyle Heights neighborhood on the east side and was featured in many movies, music videos, and TV commercials.

The original bridge spanned 3,500 feet across the Los Angeles River, multiple train tracks, US Highway 101, and several local roads. It had a 46-foot wide, four-lane roadway with 11-foot inside traffic lanes and 12-foot outside lanes with no shoulders. It also featured sidewalks of varying widths on both sides.

Due to the large scale of the project, it was originally constructed using an onsite concrete mixing plant; however, the aggregate used in this plant caused a chemical reaction called Alkali-Silica Reaction (ASR) which unfortunately led to the deterioration of the bridge within 20 years of its construction. Since then, the City tried many costly restoration methods to save the bridge to no avail. Meanwhile, seismic studies pointed to the bridge’s vulnerability in the event of a significant earthquake, and the bridge was found to have geometric design and safety deficiencies. The City ultimately determined that the bridge needed to be demolished and replaced with a new one.

The new bridge was designed by HNTB Corp, with HNTB the Engineer and Architect of Record, in collaboration with and Los Angeles architect Michael Maltzan Associates and Danish architect Dissing+Weitling. Construction of the bridge was delivered through CMGC and led by a joint venture of contractors Skanska-Stacy and Witbeck (SSW).

“The Ribbon of Light,” as the viaduct has been dubbed, opened with a July 9th public celebration held on the viaduct followed by full opening to traffic on July 10th, 2022.

“After so many years of work and anticipation, it was a great feeling this past year to see the viaduct as forms and falsework were finally stripped to reveal the actual concrete structure,” said Michael H. Jones, PE, SE, HNTB project manager, engineer of record and HNTB Fellow. “It was truly rewarding to see the completed structure exceed our expectation of delivering an extremely elegant, well-proportioned, and iconic viaduct that all Angelenos can be proud of as it connects our communities and improves mobility for everyone.”

“The City of Los Angeles Bureau of Engineering is proud to deliver the largest bridge project in the city’s history,” said Gary Lee Moore, City Engineer. “The new viaduct looks to the future and will unite the community with a multi-model structure that will be a destination point for both residents and visitors. This project is an example of what future infrastructure projects should strive to achieve through collaboration with stakeholders and the delivery of a project that improves community mobility, quality of life, safety and resilience. The Sixth Street Viaduct has achieved these sustainable goals, as shown by the Platinum Envision award.

‘“Wow — by earning the Envision Platinum Award, we’ve not only proven that the substantial sustainability goal was achievable, but also shown that the Project First Mindset worked, in that all participants delivered their part for the benefit of the environment,” said Jeff Smith, Project Manager, Skanska-Stacy and Witbeck JV

The new viaduct includes many character-enhancing architectural features, improves community access and mobility, and provides a range of public amenities, including: 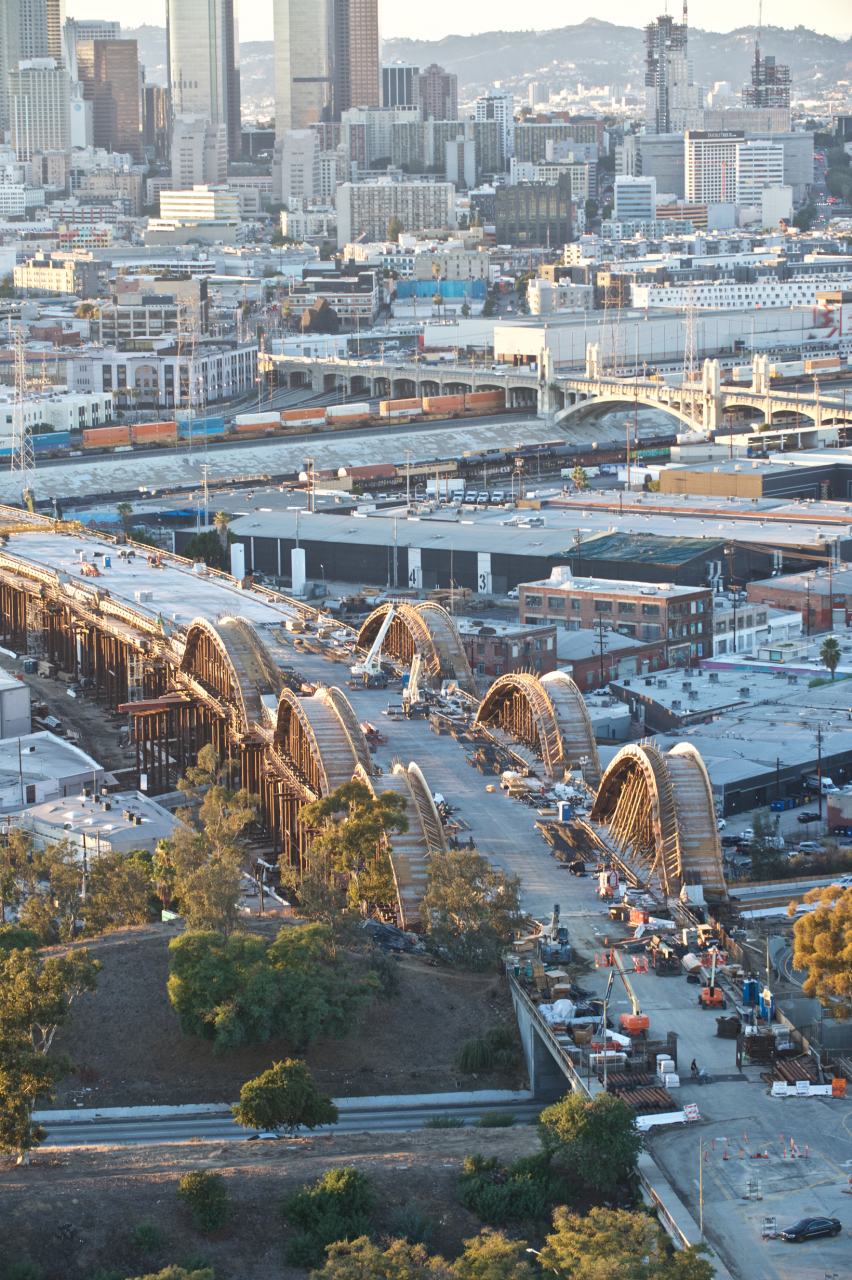 This project responds to various community needs, including the identified need for more park space in the Boyle Heights neighborhood and Central City North. The Sixth Street Park, Arts, River, and Connectivity Improvements Project, or PARC Project, will soon start development now that the viaduct is built. These improvements will respond to community needs gathered through an extensive public engagement process, including a series of meetings and community surveys. Programming elements to be included in the PARC Project include a soccer field, landscaped sitting areas, a children’s play area, grilling and picnic areas, flexible play and performance lawns, and a dog park.

Improving community safety and incorporating alternative modes of transportation into the project’s design.

As an important connection between East and Downtown Los Angeles, this bridge corridor is essential to local communities and the regional transportation network. The need for structural rehabilitation and seismic safety of the Sixth Street Viaduct was the impetus for this replacement project. Alkali-silica reaction (ASR) was causing the bridge to deteriorate over time, leading to a significant risk of collapse in the event of an earthquake. The new bridge uses the concept of seismic isolation to provide protection from anticipated future earthquakes.

The new Sixth Street Viaduct eliminates seismic safety concerns and improves safety and the overall experience for cyclists and pedestrians. For example, the project includes widened sidewalks and protected bike lanes and incorporates other elements—like pedestrian lighting, landscaping, and public art—to improve the user experience and safety throughout the corridor.

In addition to preserving the viability of the Sixth Street corridor across the Los Angeles River, the project was also designed to restore the viaduct as a community landmark and riverside space for the public.

To improve overall aesthetics and incorporate public art elements in the design of the viaduct and PARC, input from local artists and community members within the Cultural Arts Commission was gathered as part of the project’s preliminary design through the Design Aesthetic Advisory Committee, and later in the project’s final design as part of the Public Art Advisory Committee. Local artist Glenn Kaino, selected as the winner from among five finalists, will be designing public art incorporated into the PARC. His project for the viaduct will likely explore the role and potential of infrastructure as social context.

The ten pairs of arches and the helical-shaped east ramp are among many of the viaduct’s design elements that will add significantly to the area’s aesthetics.

“Congratulations to the LA Bureau of Engineering and all Angelenos on the completion of this transformative bridge that pays homage to the original iconic structure and boldly looks to the future,” said Wayne Feuerborn, HNTB West Division president. “Downtown Los Angeles and the East side are seamlessly connected by the new viaduct that also serves as a destination with accessibility for pedestrian, multimodal, and community gathering features.”

“Infrastructure projects like the Sixth Street Viaduct can be significant contributors to the socioeconomic vitality and attractiveness of communities,” said Melissa Peneycad, ISI’s managing director. “It’s exciting to see anticipation building around many new projects that are moving ahead or are proposed for the viaduct area, and also to recognize the immediate benefits — not least, the benefit to existing businesses, non-profit, and community activities from the increased foot traffic in and around the bridge.”

This project has been the catalyst for significant investment in the surrounding communities. Over 60 projects—collectively representing over $3 billion in value—have been recently constructed, are under construction, or have been proposed in and around the project site since the beginning of the Sixth Street Viaduct project. For example, 17 recently developed projects include museums and apartment buildings. New businesses and restaurants are also moving to the area because of this project. Another eight projects are currently under construction, including several mixed-use developments. And 40 additional projects have been proposed for the area, including hotels, schools, and art facilities.

The multimodal transportation pathways and walkways enlarge mobility options for visitors and the community, where car ownership is below the Los Angeles average. That enhanced mobility, together with the new venues that are being developed in the area because of this project, will spur additional long-term economic and cultural value.

Incorporating resiliency into the design.

The Sixth Street Viaduct project has been designed to withstand at a minimum a seismic event expected to occur once every 1000-years. Importantly, the Viaduct is expected to remain functional after this seismic event, which surpasses the standard for the area. Seismic isolation bearings, typically located within the viaduct columns, allow lateral movement up to 30 inches in the case of an earthquake. By using these bearings, three intermediate expansion joints were eliminated from the structure, a design decision that contributed to significant capital cost savings and will lead to reductions in maintenance expenses over the life of the project as expansion joints are typically high maintenance items.

The project eliminates the use of piers on the water which improves the capacity of the Los Angeles River basin and reduces the risk of flooding. The revitalization of the river ecosystem through the PARC Project, which will add a series of parks adjacent to the bridge, will also help create a vibrant habitat and improve overall community resiliency. 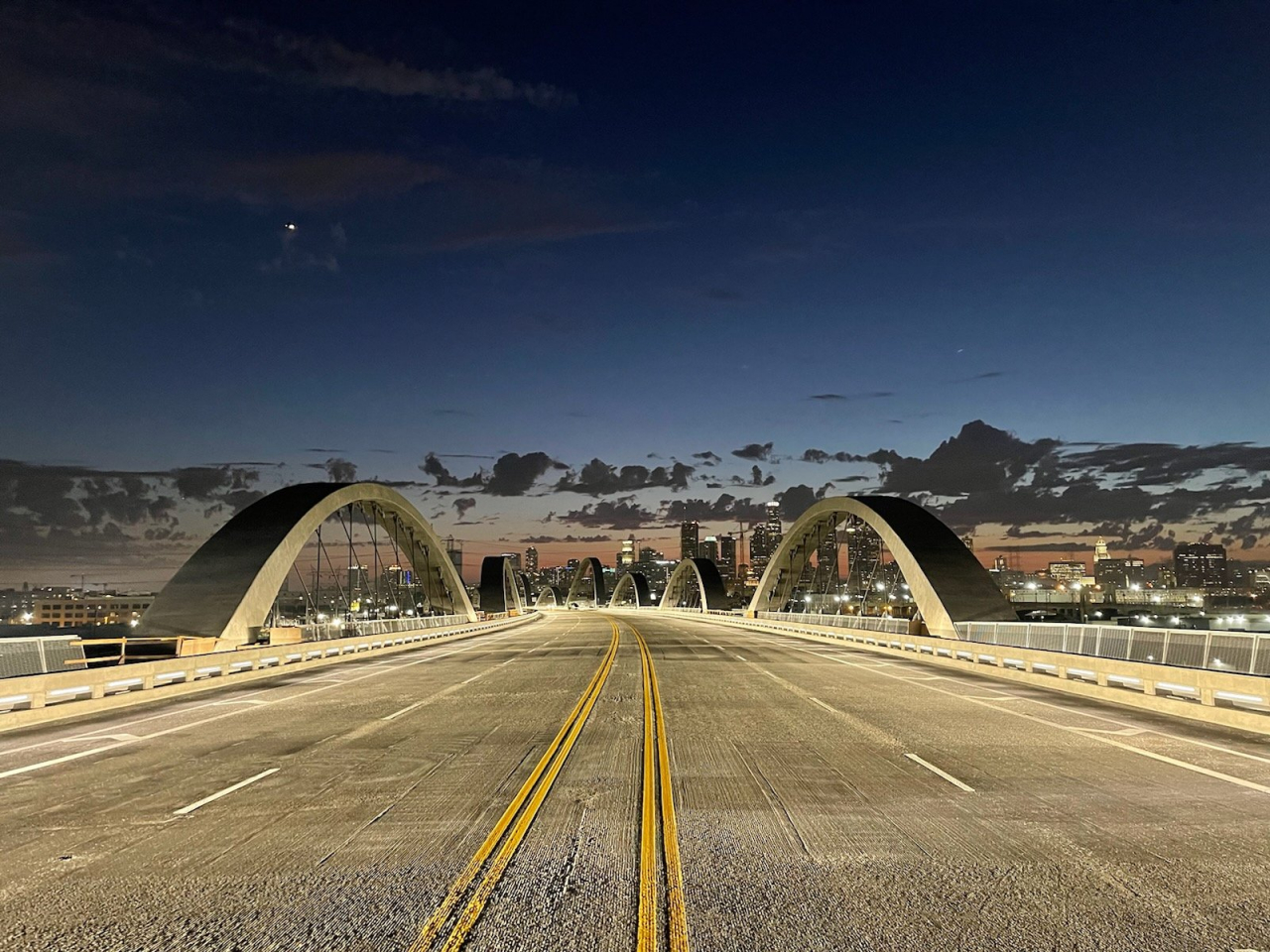