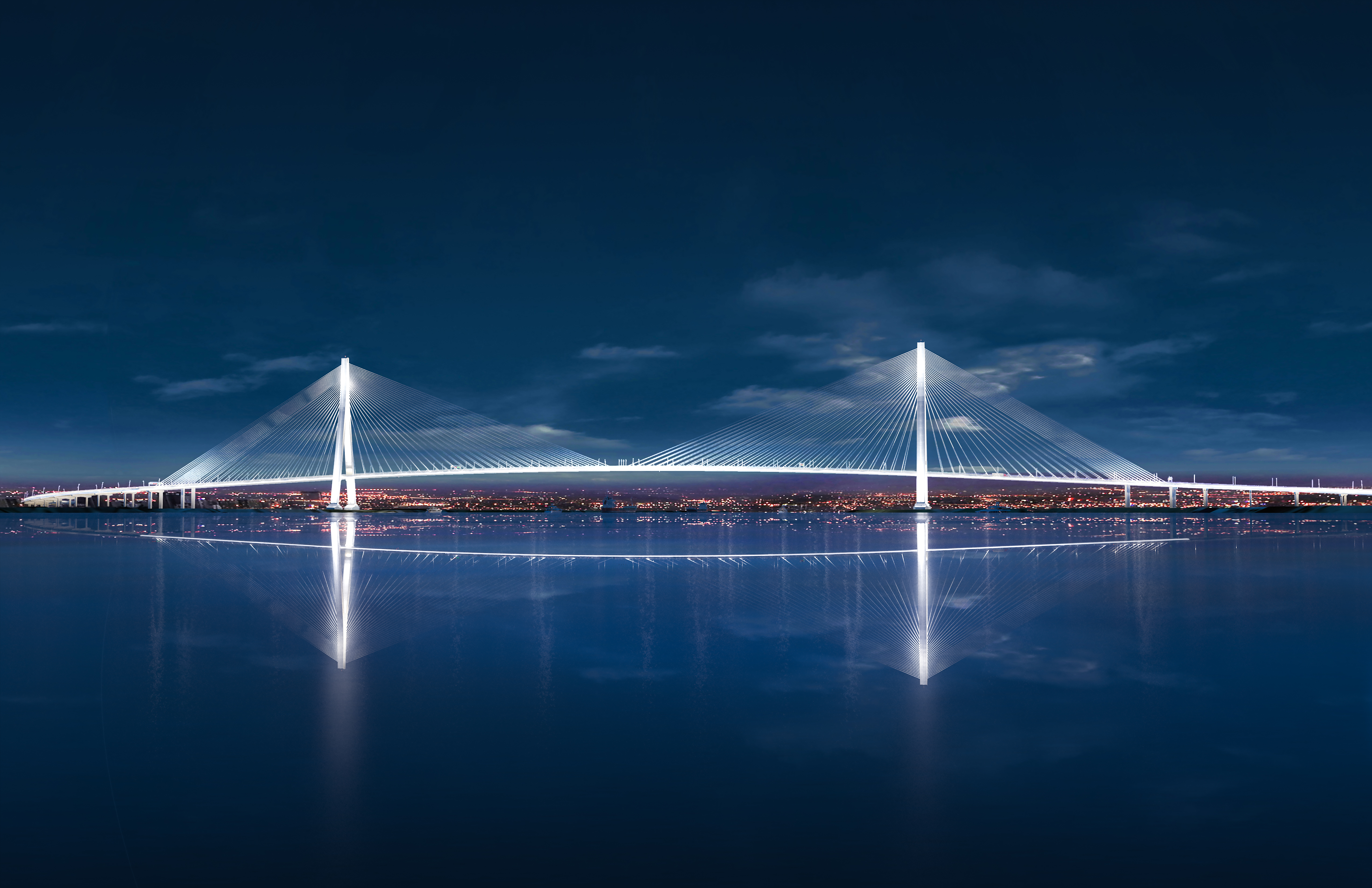 The image above is a rendering of the bridge at night.

The Gordie Howe International Bridge will provide an essential international crossing between Windsor, Ontario, Canada, and Detroit, Michigan, in the United States. This is a once-in-a-generation undertaking that will deliver significant and much-needed transportation improvements for international travelers and will provide jobs and economic growth opportunities, among other benefits.

The Windsor-Detroit trade corridor is considered the busiest commercial border crossing between Canada and the United States, accounting for more than 25 percent of all surface trade between the two countries. The Gordie Howe International Bridge will provide for redundancy at the critical trade corridor with improved border processing and highway-to-highway international connectivity. It also addresses future needs and will provide six lanes to meet anticipated growth in traffic over the years to come.

This project is being delivered through a public-private partnership (P3), a model where the private- and public-sector partners assume an appropriate share of the risks and where the private-sector’s expertise, efficiencies, and innovations are utilized in the delivery of this large-scale project. The P3 model is also good for taxpayers. An independent value-for-money analysis concluded that the P3 model will result in project savings of more than $560 million, a 10.7% difference compared to more traditional procurement methods.

The project consists of four primary components: the bridge spanning from Windsor to Detroit, the Michigan Interchange, the Canadian Port of Entry, and the United States Port of Entry.

The purpose of the project is multi-fold:
• To relieve congestion of freight trucks in nearby neighborhoods on both sides of the bridge.
• Reroute border traffic outside of neighborhoods and the main streets of Windsor, Ontario.
• Provide redundancy to accommodate projected growth.
• Improve border processing for freight and travelers.
• Increase capacity and highway-to-highway connectivity.
• Increase connectivity of existing routes and create safer routes for pedestrians and cyclists.

The bridge itself is a cable-stayed design with six lanes (three Canadian-bound and three US-bound) and a multi-purpose path for pedestrians and bicyclists. The total length of the bridge is 2.5 kilometres/1.5 miles. It has a clear span of 853 metres/.53 miles, which is the longest main span of any cable-stayed bridge in North America. There are no piers in the water.

This project will have a significant and sustained positive effect on the Windsor-Detroit region. Thousands of jobs will be created by this project. Bridge operations are expected to support a number of permanent staff , including customs and border control officers, brokers, and toll booth operators as well as duty-free, administration, and maintenance employees.

Windsor-Detroit Bridge Authority (WDBA) and its Michigan partners engaged with communities on both sides of the border to develop a robust Community Benefits Plan (CBP). it was important to the project team that the initiatives selected for implementation would provide positive outcomes for the Windsor-Detroit region and specifically focus on enhancing the communities of Sandwich and Delray, the neighbourhoods closest to the project area. The plan guarantees people directly impacted will be its truest beneficiaries.

The CBP includes improvements to streets and parks on both sides of the bridge. For example, the Sandwich Street historical district in Windsor will receive new benches, planters, and wayfinding signage, over and above $12 million in street improvements, which will be completed as part of this project. McKee Park in the Sandwich Street community will also be upgraded with a new gazebo and decking to complement other improvements, which will be made by the city of Windsor. The Gordie Howe International Bridge will safely accommodate cyclists and pedestrians, free of toll. also.

On the US side, infrastructure and landscaping investments will be made at Clark Park, which serves the Delray and Southwest Detroit communities. In addition, investments in local cycling trails and a trailhead will be completed in southwest Detroit. Local streets in Delray will receive solar-powered mobile lighting, safety lighting near homes, and upgraded bus stops.

Contributions to the Environment through Sustainable Siting, Conservation, and Ecological Enhancements.

On the Canadian side, areas in the vicinity of the project designated as prime farmland were intentionally avoided to preserve for current and future generations. Also, 100 percent of the project is located on previously developed lands, with part of it being located on a former (remediated) brownfield site.

Three examples:
– On the US side, new prairie habitat and habitat for pollinators will be provided and a peregrine falcon box will be installed on the bridge to facilitate nesting.
– More than 2,500 trees will be planted along the Michigan Interchange corridor and the city streets of Detroit.
– On the Canadian side, an eco-passage (bridge) will be developed between Ojibway Park and Black Oak Heritage Park, providing safe passage for snakes, frogs, insects, and other wildlife.

Extensive analyses were undertaken to assess climate threats and the impact of these threats on the project, and how the project might exacerbate risks. Extreme heat and flooding were identified as the hazards that will most likely affect the project over time. In addition to assessing climate risks, the project team undertook an analysis of several other traps and vulnerabilities over the life of the project. Based on these analyses, the project has been designed to be more durable and has been prepared for long-term adaptability.

Melissa Peneycad, ISI’s managing director, said: “This project is a symbol of international cooperation between two great countries. It provides proof that when we work together collaboratively and learn from each other, we can achieve outcomes that benefit people, the planet, and improve economic prosperity. The degree to which sustainability has been baked into the design and decision-making processes of this project is impressive. The team deserves to be commended for leadership in sustainability.”

Bryce Phillips, Windsor-Detroit Bridge Authority CEO, said: “The Envision Platinum Award is an outstanding achievement and I would like to congratulate the teams involved for their commitment to meet the highest environmental standards for sustainable infrastructure. The Gordie Howe International Bridge project will not only address regional transportation needs to help grow the economies in Canada and the US, it has been designed to contribute to a cleaner environment, protect the communities of Windsor and Detroit from the impacts of climate change and conserve resources for future generations.”

Michael Hatchell, Bridging North America CEO, said: “We are proud to share the prestigious Envision Platinum Award. Through a collaborative process with WDBA, our staff developed key performance indicators with sustainability objectives that led to increased levels of achievement across the Envision rating system. It is an honour to be recognized with the highest possible distinction for our commitment to the environment and sustainable infrastructure.

A virtual bridge tour (https://www.gordiehoweinternationalbridge.com/en/1000-days-of-construction) is available online which allows you to walk through the construction sites for the bridge project.

For more information about this project and its sustainability commitments and achievements, please visit the project website (https://www.gordiehoweinternationalbridge.com/en)